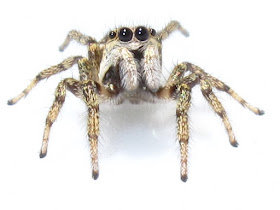 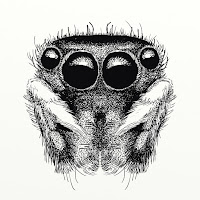 Salticidae is the largest spider family of the world, and easily the most charismatic. Their large frontal eyes and visually driven behaviour makes them instantly likeable. They are mostly diurnal and have a preference for sunny, warm habitats, which means it is not so well represented in the UK. There are just 36 species, most of them in the south and many very locally distributed. Jumping spiders are also easily recognisable for their eye pattern: four eyes facing forward, the central two much larger than the others. Jumping spiders move in a distinctive way, with sudden runs forward and frequent stops, when they orient their cephalothorax ostensibly to look around. They jump very well, and do to do so in a controlled way (unlike grasshoppers and fleas, which can jump longer distances), always securing a drag line just before each jump. Silk is used as safety lines and also to weave a sac for resting.

Visual spiders
Jumping spiders are the arthropods with the best visual sense. Their large anteromedian eyes are responsible for their visual acuity, while the remaining six eyes act as motion detectors. The lens of the eye is part of the cuticle and is fixed, but the eye tube orientation is controlled by six pairs of muscles. They have an additional internal lens in their eyes, which together with the detailed configuration of the retina makes them work like miniature telephoto lenses. Their acute visual sense is used during hunting, to locate prey often at remarkable distances. They can approach prey taking a detour, instead that on a straight line, and when they are close to the prey they stalk it before jumping on it. They can also use a sit-and-wait strategy, constantly scanning the environment visually. 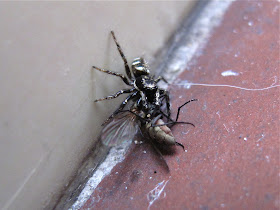 A male Salticus scenicus with a house fly prey. 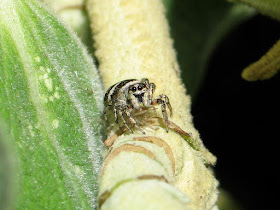 Semaphore courtship
Salticids have colour vision, even in the ultraviolet. This explains why some species are so strikingly colourful - often with iridescent scales or cuticle. Males have often more colourful palps, front legs, chelicers and the area around the eyes, and these features are used during courtship. They use a combination of visual and auditory cues (drumming) during courtship, which can incude chelicer opening, abdomen drumming and palp waving, often in a mesmerising, balletic routine, which the females watch attentively. I really recommend watching the fantastic collection of videos of the Australian Peacock spiders by Jurgen Otto, which have taken spider courtship to its most dazzling extremes. The stripped black and white Salticus scenicus or Zebra Spider, is widespread in the UK. In this species the most obvious difference between males and females is the size of the chelicers, which are massive in the males, and are used for sparring (watch this short clip of two males sizing each other up), but their courtship is not the most complex. The males raise their front legs and open and close the chelicers in front of the female, but they also chase females into their retreats, where mating often happens. 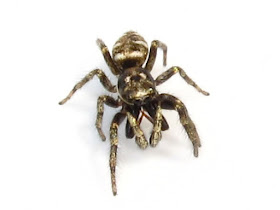 Male Salticus scenicus. Note the long black chelicers with the palps over them (look at the female on the top shot for comparison).

Synanthropic species
The tiny Pseudeuophrys lanigera seems to have a preference for buildings and roofs. I have found it inside my office and lab a few times, and once on my house wall. It is probably very under-recorded due to its small size (5 mm). 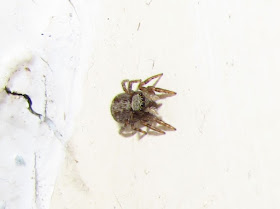 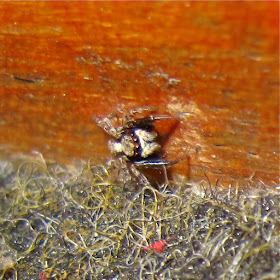 Another human-associated salticid in the UK is Hasanius adansoni. A tropical species in origin that has expanded across the world to occupy buildings in warmer areas or heated glasshouses in cooler climes. In the UK, there are records from the early 1900s, and it has been found in Kew Gardens, the Eden Project, and the Royal Botanical Garden at Edinburgh, amongst other places. In Edinburgh, it is likely there has been a colony for over a hundred years. The following photos were taken in a garden in Mallorca. Males and females are strikingly different, the male is darker with white stripes at the front of the abdomen and palps. red 'goggles' and black front legs. The female is very pale, with a yellow face. 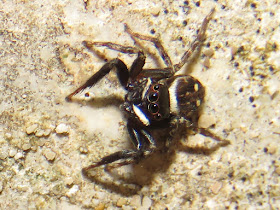 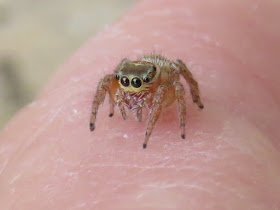 Female Hasarius adansoni.
Ant mimicry
Three genera are very convincing ant mimics, moving and looking like ants. Myrmarachne has a raised front of the cephalothorax, which gives an impression of the ant's head. Some have constrictions in the abdomen and the colour patterns further disguise the presence of eight legs. The ant mimics are quite scarce and local here where they reach the limits of their distribution, but are much more numerous in the tropics.
Africa Gomez at 11:41
Share