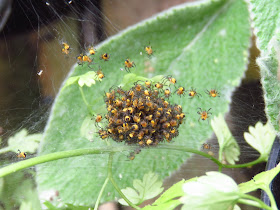 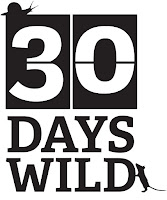 Today for 30 days wild we did a spider safari. Any day is as good as the next for spiders if you ask me, but I am aware there are many people either fearful or wary of spiders. If you are in either of those categories, thank you for reading on, I hope that at the end of the post you look at them for the wonderful and diverse group they are and by understanding them better you might keep a certain level of respect for them, but enjoy them more. All the photos were taken today.
My daughter found a large cluster of Garden Orb Spider Araneus diadematus spiderlings in between two pots (above). These spiderlings balls are now everywhere (even on my car!). Once they hatch from their silky cocoon, they will stay in a tight ball for a few days in a communal web. After they moult they will disperse to make their individual webs and start catching tiny insects, mostly aphids.
There are two age groups of Araneus in the garden now. The tiny newborn spiderlings and the year old spiders which have survived the winter and are not mature. This large male has built its web in a flowering sage with is always busy with insects. 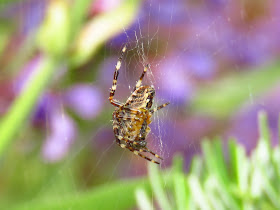 Male Araneus diadematus on his web. 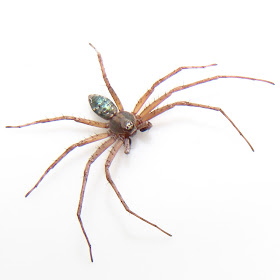 We also found this lovely spider crawling on a hedge, on our way back from school. Males of some crab spiders have iridescent scales on their bodies. I think this is Philodromus aureolus. After failing to take a photos where it was as it was quite mobile, I potted it to photograph at home. Shortly after I released him in the garden I found another individual on ivy, and what could possibly be the female of the same species (below). Crab spiders don't build webs, instead sitting on leaves or flowers to ambush flying insects that stop to bask or feed on the flowers.There are several common Philodromus species, and without microscopic examination of their genitals (or palps in the case of males) identification to species is not possible, which is sadly true for many species of spider. 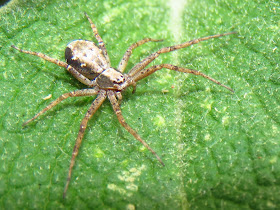 I searched on some bare ground in the garden and didn't take long to find a wolf spider, a Pardosa, (probably amentata). Wolf spiders don't build webs either, but they move about searching for insects, although they also do quite a lot of basking on sunny spots on the ground. As they don't have a 'home' females carry their egg sacs with them attached to their abdomen, which you can see in the photo below. This photo also illustrates the maternal behaviour of spiders: many species build a cocoon for their eggs, which they attach to a dry corner, or carry the egg sacs with them, or the spiderlings (wolf spiders do this!) or even feed the spiderligs with eggs, regurgitated prey or especial eggs. The most extreme form of maternal behaviour is matriphagy, in which the mother allows the spiderlings to eat her, and eventually kill her. 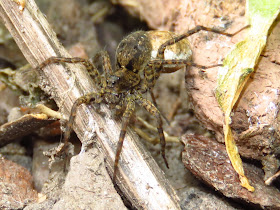 Another favourite place for spiders is the log pile. I removed a few logs and found a Blue Lace Spider, Amaurobius similis. A spider that forms a very characteristic form of carded silk and can be found on crevices on walls or trunks or on thick ivy. Amaurobius is one of the bunch of species in which females sacrifice themselves to their first batch of spiderlings, a matriphagous species. 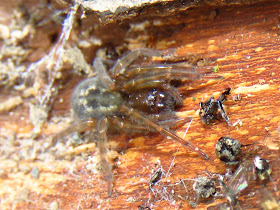 And a few logs later a large female House Spider, Tegenaria sp. House spiders built sheet webs funnelling into corners, where they have a retreat. When potential prey lands on the sheet they come out and trap them. You can entice them to come out by spraying some water on the sheet web. If you see a large spider with long legs in the autumn running around on your living room carpet, or you find one in the bath in the morning they are likely to be a male Tegenaria. They have abandoned their retreats and go about searching for mature females to mate. 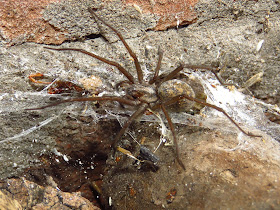 Then it was time to go inside. I have a thriving Pholcus phalangiodes (known as Daddy Long Leg spiders) population in the house. They hang from corners in the ceiling, not moving much. This mature female, which lives under a shelf in the toilet, with her distended abdomen, looks ready to lay her eggs. She will wrap them loosely with silk and carry them in her mouth until they hatch. Then she will sit by her spiderlings for two weeks (presumably not eating anything during this time). Despite their spindly appearance, Pholcus are fearsome predators, capable of subduing much larger and stronger spiders by wrapping them in silk with their long legs. 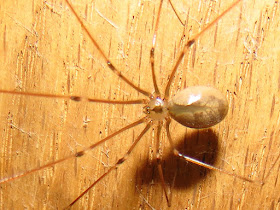